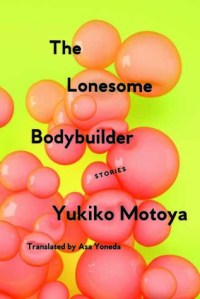 ‘The Lonesome Bodybuilder’ is a short story collection written by the female Japanese author Motoya Yukiko 本谷 有希子 (born 1979). It consists of ten, mainly weird surreal short stories. The longest story, about half of the book, is called ‘An Exotic Marriage’ which won the 154th Akutagawa Prize in 2016.

The central theme is about daily life from the perspective of a wife, who compares her relationship with her husband with a so-called snake ball. Imagine two snakes eating each other from the tail up to their heads until they form a ball. It is obvious, that she struggles with the concept of marriage and her odd husband, who is going through a metamorphosis throughout the story with a surprising end.

The other stories of the compilation are different in quality and length. They can be summarized as bizarre, witty, surreal and somewhat absurd.

I liked ‘The Lonesome Bodybuilder’, a story of a wife who begins body-building in order to impress her husband. As her muscles grow everybody around her makes remarks, but the one who does not notice her physical changes is her husband.

The ‘Fitting Room’ is very funny as it takes the idea of customer service on to a new level. ‘Q&A’ contains an interview with a fictional female celebrity in her eighties, which is amusing and witty.

‘Dogs’ is a dream-like story about solitude and dog-friendship in a surreal setting during winter in an isolated mountain cabin.

Motoya Yukiko writes stories of magical realism.  She cares about females struggling with loneliness and unfulfilling relationships. Her ideas are based on the idea of woman’s emancipation and liberation from modern Japanese society. I think her writing is unique and recommend her book to readers who like experimental literature.

Title:
‘The Lonesome Bodybuilder’ by Motoya Yukiko was translated by Asa Yoneda. It was published in 2018 in an US version. The anthology was also published as ‘Picnic in the Storm’ in Great Britain.

This work is licensed under a Creative Commons Attribution-NonCommercial-NoDerivatives 4.0 International License.