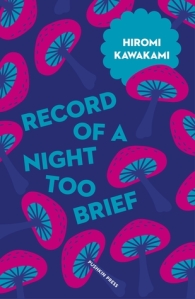 Here is a collection of three short stories by Kawakami Hiromi 川上 弘美 (b. 1958) of her early career as a Japanese female writer, beginning in 1996. All were translated into English and published in 2017. Kawakami Hiromi is best known for her novels ‘The Brief Case’ (センセイの鞄) and Manazuru (真鶴).

In the title story ‘Record of a Night Too Brief’ Kawakami Hiromi describes dream sequences of a journey into an undiscovered land. It begins with the narrator becoming a horse and a stream of people leading her to a big banquet table with a buffet of delicious food. The scenery is depicted with surreal pictures and reminds me slightly of ‘Alice in Wonderland’. From there on the tale reads like a stream of continuing changes. It is a Kafkaesque metamorphosis of an indescribable plot containing elements of a locked-in situation, a monkey hunting the narrator and eventually a porcelain girl becoming a pearl.

The second story ‘Missing’ tells a family history from the perspective of a girl. One day her brother no. 1 disappears, but sometimes his voice can be heard and from time to time he makes himself visible to her. The narration is inspired by Japanese folktales including elements of magical realism.

‘A Snake Stepped On’ is one of Kawakami Hiromi’s best-known tales. 蛇を踏む (Hebi wo fumu) won the Akutagawa Award in 1996. It is a highly symbolic story about a struggle for independency with elements of folktales like the snake spouse. The narration follows the surreal paths as the first two stories in this collection. All three are well written and highly imaginative. Because of the experimental character of the stories they are sometimes difficult to understand.

Title:
Kawakami Hiromi: A Record of a Night Too Brief. Pushkin Press, 2017. Translated by Lucy North.