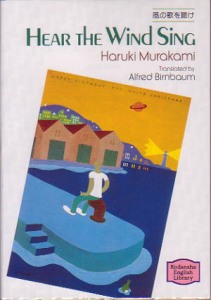 ‘Hear the Wind Sing’ (風の歌を聴け) is the first novel of Murakami Haruki published in the literary magazine ‘Gunzo’ in 1979 and won the ‘Gunzo Prize for New Writers’.

Murakami wrote two following books and named it the ‘Trilogy of the Rat’. The second novel is ‘Pinball 1973’ followed by ‘A Wild Sheep Chase’.

‘Hear the Wind Sing’ is about friendship between two young men and the beginning of a love-story with a woman added by a mix of childhood memories, bar stories, therefore lots of alcohol and music.

A nameless student visits his hometown during the summer holidays in the 1970’s. He spends most of his time with his old buddy ‘The Rat’ in J’s bar. One day he finds a drunken woman in the restroom and takes her to her home. A love story begins.

The book contains mainly discussions with ‘The Rat’, memories of the protagonist’s childhood and ex-girlfriends. Thoughts about love and life in general.

Murakami uses collage techniques adding song lyrics and quotations of books. The novel is written in juvenile language and depicts the style of the 70’s in Japan.

Considering that ‘Hear the Wind Sing’ is the first novel of Murakami Haruki it was an interesting read. The potential of the then young author is clearly visible and the reason for the newcomer award of Gunzo in 1979. What I liked most about the book was the love story and the overall collage style.