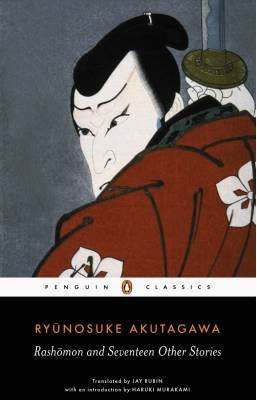 This is a fabulous selection of Akutagawa‘s stories from his early years until his later work period including his classics and some little known works. The stories are selected and translated by Jay Rubin and the book comes with an introduction by Murakami Haruki.

Akutagawa Ryûnosuke 芥川龍之介 (1892-1927) is one of the most influential Japanese writer and was even praised during his lifetime by his contemporaries. The young Akutagawa was encouraged by Natsume Sôseki 夏目 漱石 (1867-1916) and became an idol for many Japanese authors until today. Murakami Haruki admires him since his early schooldays.

Akutagawa has written mainly short stories, a genre very popular in Japanese literature. His first stories include mainly historical themes. Rashômon and In a Bamboo Grove are rewritten folktales of the 12th and 13th century. These were made into the well-known movie Rashômon by Kurosawa Akira in 1950.

Apart from that The Nose and Hell Screen are remarkable historical tales, outstandingly and thrillingly narrated by Akutagawa. Then there are some of his tragicomedies in this collection like Under The Sword, where a samurai suffering from migraine makes a deadly mistake with his sword. In Horse Legs the reader gets to know, how a man lives with two horse‘s legs.

Akutagawa‘s early stories of his own imagination are vivid psychograms. He read a lot and was influenced by Western authors as Dostoevsky, Tolstoy, Strindberg and others, which can be seen in his works.

His later semi-auto-biographical stories are very moving and astonishingly well-observed. Especially Daidôji Shinsuke: The Early Years, The Life of a Stupid Man and Spinning Gears. Akutagawa writes here about his own family background, behaviors and manners, inner struggles and personal stories.

Akutagawa was strongly influenced by the mental illness of his mother, who became mad shortly after his birth. She was living in the same house with him, but was not able to raise her son. Constantly under psychic pressure he became sick himself and permanently feared to get mad. Akutaga killed himself by an overdose of Veronal at the age of 35. His death shocked the whole nation.

His stories are outstanding until today, combining Japanese topics and symbolism of several historical episodes, rewritten for the modern reader. Furthermore his short stories of later years give a lively insight to his suffering and daily life and can be seen as unique documents of his life.

Many of his works have been translated into English and are available in various compilations, but this book is a good starting point and gives an overview of the work of Akutagawa Ryûnosuke.

Rashômon and Seventeen Other Stories by Akutagawa Ryûnosuke, Penguin Classics 2006.

1 thought on “Book Review: Rashômon and Seventeen Other Stories by Akutagawa Ryûnosuke”