Have you ever heard of Naomi- ism?
That was the effect of Tanizaki Jun‘ichirôs book in Japan  in 1924. It was a hit!

It was serialized in the Osaka Asahi newspaper from  March 1924, censored and forbidden by the government in June 1924, but five month later published and completed in the modern women‘s magazine Josei (woman).

Young progressive men and women of the Japanese Jazz age were eager to read the novel. It was Tanizaki‘s breakthrough and is still seen today as a modern, provocative novel.

The Taishô era (1912-1926) was „a significant era for women,[2] when women began to play a wider role in society. The number of working women [shokugyô fujin] had been increasing along with the rapid progress of industrialisation and urbanisation.[3] The development of the higher education system, particularly the rapid expansion of women’s higher schools [kô tô jogakkô], produced more educated women participating in various levels of the workforce as professionals.[4] More women began to discuss women’s rights issues such as suffrage, birth control, equal employment opportunities and property rights.[5] Some young women adopted Western fashions, cut their hair short and wore
dresses. These ‘new women’ came to light as a group, not only as social or political participants but also as vigorous consumers in Japanese society.[6] They had a wider choice of lifestyles[7] and more diverse viewpoints about society than their predecessors,
who had few choices besides marrying and raising children. The magazine Josei [Woman] styled itself to suit the needs of these women“. (cited: Kazumi Ishii: Intersections: Gender, History and Culture in the Asian Context S. 1.)

The Japanese title Chijin no ai means „A Fool‘s Love“ and describes the nature of the relationship between Jôji and Naomi.

Naomi is 15-year old Japanese girl with an exotic name, that sounds Western. She is attracted by Kawai Jôji , an 28-year old engineer. They first met at the Café Diamond in Asakusa, Tokyo‘s amusement district, where she works as a budding hostess.

Exotic Western and stylish appeal, looking like Mary Pickford, that is the description of Naomi. Jôji thinks that she is not the most beautiful woman in the world, but he is not willing to marry a woman at his age, because of all the annoying effects of the procedures of omiai and the disadvantages of a marriage. Instead of this, he wants to take young Naomi into his house, let see her grow up and consider then, if he can marry her. So far his plan …. 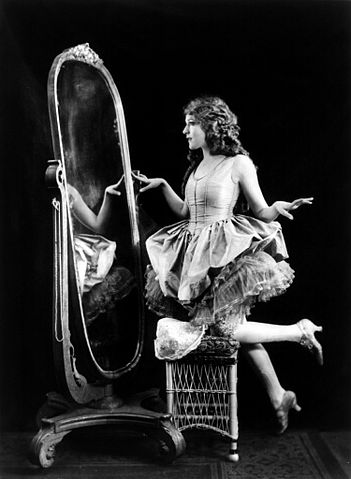 Naomi comes from a socially disadvantaged family, that does not care much about her. She is freely allowed to move into Jôji‘s Western styled house, where they live leisurely as friends. Jôji’s passion is to dress her as stylish as she can be. He buys her tons of cheap Western clothes. He is possessed by the wish of making her his own. In order to model her after his wishes and the new fashion of Tokyo, they invent plays and funny rituals at home. Jôji is aware, that he is making a fool of himself, but cannot withstand her. He acts more childish than Naomi herself. He does not only love her, but wants to possess her.

There is an imbalance from the start, as he is fathering her and deep in his mind he is wanting her as a woman. Therefore literary critics often compare Naomi to Lolita by Nabokov, but it can be also seen as a Japanese My fair Lady.

Once on a trip to Kamakura, Jôji watches other Japanese women on the train. As he thinks about them, he regards them as sophisticated and well-mannered as they are styled in the old traditional Japanese way. Suddenly he feels ashamed of Naomi. In comparison to the others he regards her as cheap looking and having bad manners. Their natural relationship shows the first sign of a crack. Because of his class distinction, he is showing some guilty feelings.

One day Naomi takes him into her arms and he falls in love with her, swearing eternal love by giving her everything she wishes and all his money. He wants to overload her with everything and his overwhelming feelings.

At the age of sixteen he registers Naomi as his wife with the consent of his and her families. But Jôji‘s mother gives him a warning about Naomi’s low character. On the outside they are still acting not as a couple, everybody should think they are just friends.

First she does not want all Jôji’s money, but only the payment for music and English lessons. When Naomi goes out frequently, she learns to know others at her age and dancing will become her greatest enjoyment, as Tokyo has got the dancing fever.

Jôji becomes slightly aware, that Naomi is not the person of his imagination. Their relationship changes, when he realizes, that she is a woman, that attracts others. He goes crazy about her.

The story has many absurd scenes, is funny and breathtaking crazy. Naomi is a real unique literary figure. The story has many turns and one can grasp the feeling of the roaring twenties. It is a story about a Japanese amour fou.