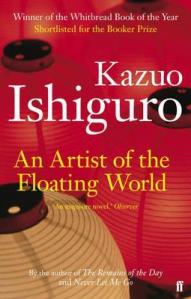 Although Kazuo Ishiguro is a Japanese author, his works are assigned to British literature. He was born in Nagasaki in 1954 but moved to England when he was six years old. He writes in English. Two of his well-known books so far deal with Japanese topics.

An Artist of the Floating World was published in 1986.

The Japanese artist Ono Masuji is now an old man. He looks back on his career as he had spent several years as a traditional ukiyo-e painter. Ukiyo 浮世 means floating world. It stands for the momentariness of enjoyment. The main motifs are geishas, actors, scenes of theater, brothels, sexual fantasies, amusement, and the like.

The timeline of the story spreads over from October 1948 to June 1950: the first years after Japan’s unconditional surrender after WWII under American occupation.

The personal story begins as Ono’s daughter seems to have no chance to marry an adequate husband. A first marriage deal has failed, and the second is difficult. It is likely because of Ono’s past. In the 1930s Ono had dedicated himself to the military regime and the ideology of Japan’s expansion policy. He became an influential artist with many followers.

At present Ono reflects his own guilt. He is regretting his behavior and apologizes for his role during the 30s and 40s. He talks to his relatives and speaks frankly about his faults. During a marriage arrangement meeting (miai) of his daughter he suddenly bursts out with his own life-story– in front of his and the fiancé’s family. Ono feels deeply remorse about his responsibility in the expansion politics of Japan and the overall destruction.

The Ono family lives in a Japanese town, which was destroyed. Ono has often been visiting a traditional Japanese bar in the former red-light district. The surrounding is a debris field. The last bar will soon give up, and then there will be nothing left of the traditional amusement district anymore.

Signs of changes are everywhere: the young Japanese are all eager businessmen. Ono thinks that economy growth turns to be the new religion.

His family of three generations is changing as well. His son-in-law belongs to the new generation who accuses the elder men of being responsible for the war.

In backflashes Ono’s memories of his youth and his painting career are detailed and colorfully described. The reader gets much insight of the ukiyo-e painting tradition.

Ono lived his life against great odds. Once struggling against his father, who had burned all his early paintings, against two of his former teachers and even against his colleagues or followers. The key scenes are emotional, it is a story of power and destruction.

An Artist of the Floating World is worth reading as a novel of changing Japanese tradition and coming to terms with the past.

2 thoughts on “Book Review: An Artist of the Floating World”